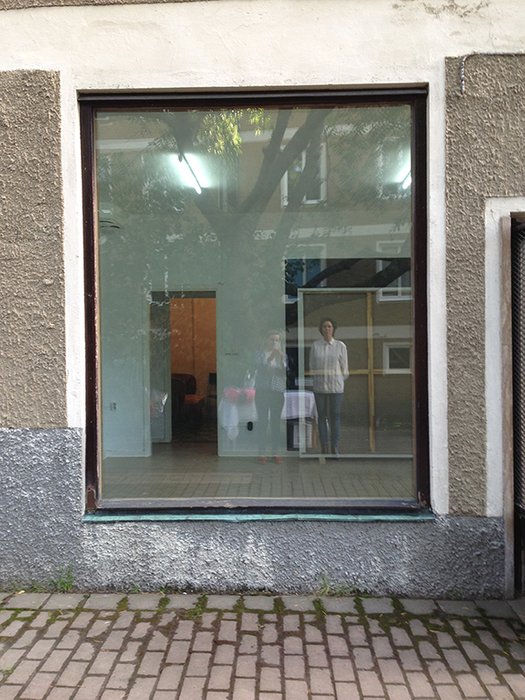 Turning its back on the surrounding world and the viewers the construction itself is dissociated,

outdistanced, outstripped. The viewer is found in the periphery, in Hökarängen, a suburb South of Stockholm’s downtown, actually a part

of the city known for nothing. First, she is permitted to entry the hall. Then, behind the window pane of the exhibition hall, a string quartet performs a piece of music for only one single person, specially invited. However, this person is not herself, but represents another person, that is, an artist no longer existing, an artist who has never been here and would never be either. Long ago, this person was listening to the same piece of music, alone. This was not of her free will, but the performance was a gift from a friend.

Behind the quartet the viewer catches the glimpse of a work of art, a painting. Turning the back

on the world only the reflections of the painting are seen against the white wall, leaning against it, embraced by blackness. In a corner, there are movies, not really art works, only crude information, a kind of moving sketches. The image of a mountain too is such a sketch.

One is, of course, able to read the exhibition as a meditation on the American artist Agnes Martin and her life in the distant desert town of Taos in New Mexico. Turning her back to the entrance of her studio she painted her paintings to emphasize her attitude of her repudiation

of the world in general and the art elite   of New York in particular. Her back was the sign of her indifference to being confirmed by her contemporaries. This had a reversed effect and contributed to the myth     of Agnes Martin.

Together with her ascetic life and her self-chosen loneliness this back on the world created the story of the great artist, the genius risen above our daily concerns, like a Diogenes living in the ceramic jar, or like a spinning Mahatma Gandhi. But myths are seldom true by daylight, they flourish only in the dusk or in the dawn, in those moments when the glowing sky shines and the shadows of the ground hide the ugly everyday life with its hunt for status and satisfaction of one’s needs.

Like Elisabeth Frieberg discovered during her stay in Taos in May 2013, Agnes Martin was somewhat manipulative, though human in every respect, having mistresses and favorites, being soft on flatteries, preferring to be subjected to affirmative actions, in her capacity of being precisely the acknowledged and great artist that she actually was, fully aware of her own myth.

Only behind the window pane, on a certain distance, turning its back on the world, without inter-pretations or explanations, the absolute may rise and Agnes Martin resumed. 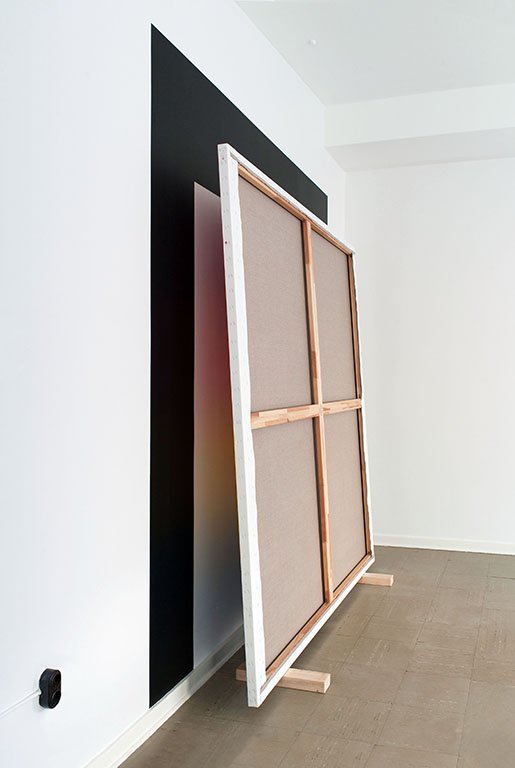 Painting reflected on the wall 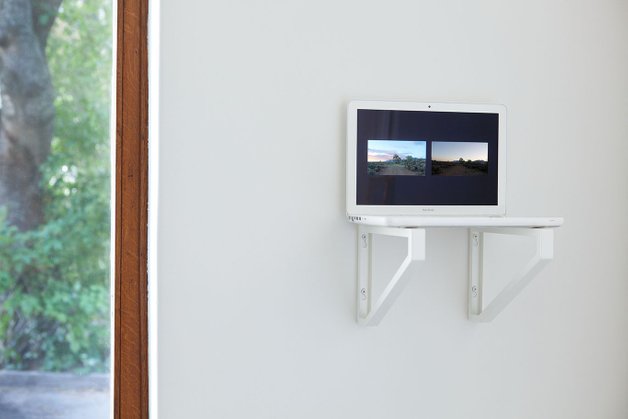 Sounds and moving images from my evening and morning walk during the last dusk and last dawn before leaving Taos, New Mexico after a working stay in 2013 researching on the artist Agnes Martin.

From the videos, shown in the exhibition Dusk and Dawn, on my laptop you hear crackling footsteps from me walking in the desert landscape surrounded by singing birds and a howling Coyote. The viewer follows my walks in the perspective of the film camera leaning on my chest.

Along the small dirt roads of the Taos outskirts one can see different kinds of bushes and trees in the desert landscape and in the background parts of the southern Rocky mountains. 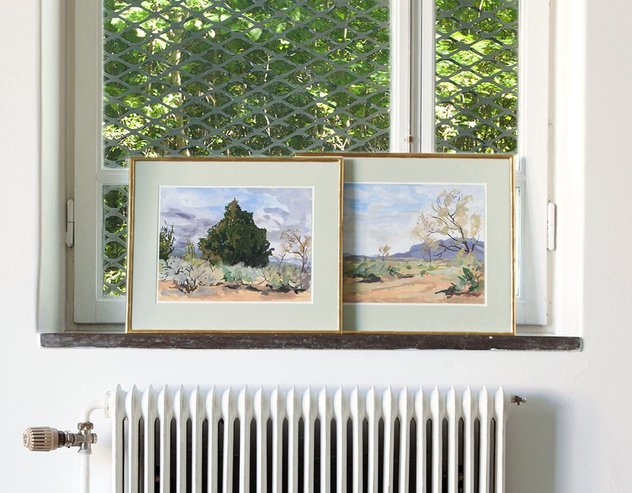 Studies made with gouache painting sitting on the ground out in the open air. You can spot the same motif from my walks in the videos Taos 270513 and Taos 280513. 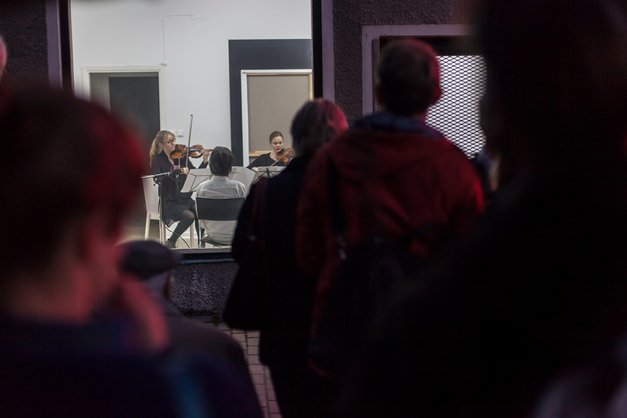 With my back to the world

The performance took place in the dawn on the opening reception night of the exhibition Dusk and Dawn at the artist run space Cigarrvägen 13, Hökarängen, Stockholm 2013.

Documentation from video recording of With my back to the world:

Agnes Martin (1912-2004) once received an unusual birthday gift from one  of her friends, a screenwriter, in her hometown of Taos,  New Mexico.The gift was a performance by the local Taos string quartet. Ludwig van Beethoven's The Great Fugue (Op. 133), one of Martin's favorite pieces,  was played by the quartet with only Martin as the audience. Martin was seated among the musicians on stage.

At dusk on September 20th 2013 Elisabeth Frieberg reconstructed the birthday gift in the southern suburbs of Stockholm on the opening night of her exhibition Dusk and Dawn. The birthday gift was given the title With my back to the world, and re-enacted in a closed exhibition space. The exhibition visitors were literally kept outside    but could view the reconstruction through a large window. 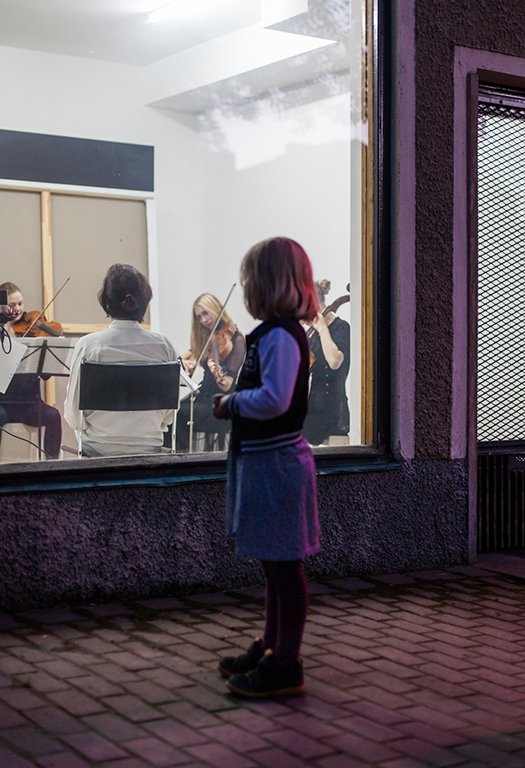 On a night in mid September the artist Elisabeth Frieberg invites to the opening reception of the exhibition Dusk and Dawn. The location is ”Cigarrvägen 13” in Hökarängen, an old hairdressers salon on the ground floor of an apartment building, which now is a project space for contemporary art.

The small paved spot outside, where we, the invited, are gathered functions this evening as a anteroom to the exhibition space. In a corner,    a table with refreshments. Next to it, hanging in the trees, a microphone. Is it connected? Or does it have any function at all?

Through the large display window, in to the exhibition room, you can see yet another microphone. In the room there is also five chairs,        with a music stand in front of four of the chairs. On the walls a glimpse of paintings and sketches.

The artist herself hastens in and out through the small door next to the window, busy doing something that seems to be preparations.     What’s going to happen. The invitation for the evening has not revealed anything.

From nowhere materializes four young women wearing black. They take seats on the chairs, with string instruments in their hands.              The artist herself then walks to the room, closes the door and sits down on the fifth chair. With the back against the windowpane and the audience outside.

For about 15, or maybe 20 minutes the string quartet is playing. It could be two or three pieces. The experience is striking on considerable levels.

As an image it is beautiful and mysterious. The windowpane and the lit room in the September darkness become a sort of frame – a motif    with several associations. The thoughts go to Hoppers night open restaurant. The people in the room look like characters out of an Ola Billgren painting.

Yet stronger is the experience of the artist herself: will she do something where she is sitting? She stays nevertheless completely still through-out the whole concert. The microphones are never used. The feeling amongst us viewers becomes double. On the one hand the lonely back emanates vulnerability and nakedness towards the world. On the other hand it is an act with self-confidence to make oneself the only audience – and moreover shut all the others out. The feeling of gravitation, concentrated to the spot where she sits is tremendous.

After a while when the mind settles we viewers are also able to enjoy the music. When it goes silent the artist rises from the chair and opens up the door again. The whole finishes as uncommented as it started. While the musicians are packing up we finally are let in to the exhibition. We enter, filled with the experience.