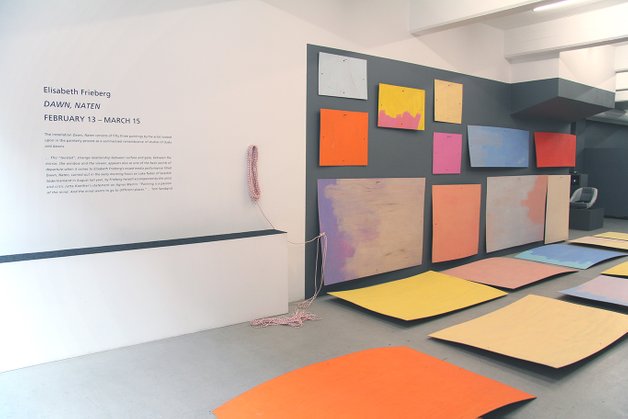 Painting installation Dawn, Naten consists of fifty three paintings by the artist looked upon in the painterly process as a summarized remembrance of studies of dusks and dawns.

AN EARLY MORNING IN AUGUST

Here seem to be two, at least two points of reference both of them intersected with each other. Largely inspired by the American painter Agnes Martin and her reflections in her art upon the essence of painting as an existential drama staged on the surface of the canvas regarded as an object in space as well as apparently constantly occupied with the conception that painting’s raison d’être is light rendered through color, Elisabeth Frieberg must be very much aware of these prerequisites of painting itself: surface, object, and light, around which her paintings revolve to an extent firmly rooted in her practice.

Starting with semi-abstract paintings capturing what seems to be the reeded surface of a lake held together by a fine-meshed grid à la Agnes Martin, not particularly long ago, she has also presented large paintings showing oval-shaped water pools which reflect both the surrounding vegetation and wisps of cloud in the blue sky, paintings reminiscent of those painted ceilings which we occasionally find in Baroque churches, though Frieberg’s depictions fight resolutely against the impression of a window pane behind which – like in traditional Renaissance art – the scenery happens. On the contrary the blue sky, the clouds and the trees show the world in which we, the beholders, are placed looking at the surface reflecting this world: the painted surface is turned into a mirror, itself a viewing device.

This “twisted”, strange relationship between surface and gaze, between the mirror, the window and the viewer, appears also as one of the basic points of departure when it comes to Elisabeth Frieberg’s mixed media performance titled Dawn, Naten, carried out in the early morning hours on Lake Naten of Swedish Södermanland in August last year, by Frieberg herself accompanied by the artist and critic Jutta Koether’s statement on Agnes Martin: “Painting is a passion of the mind. And the mind wants to go to different places.” If Agnes Martin’s locus is Taos, New Mexico, the extravagance of the landscape, within which the art happens responding to those inner-aesthetical impulses which, at least occasionally, must have been evoked by the infinitely small changes in the colors and the patterns of the rocks and vegetation observed by the painter driving from home to her studio day after day, year after year, then, indeed, Elisabeth Frieberg returns to her parents’ summer house at Lake Naten. This is a house originally built in 1905 by the master housepainter Johan Ludvid Högberg, then bought by her grandparents, the artists Ryno Frieberg and Beth Zeeh, in the 1950’s, the place of scrupulous studies of dawns and dusks ever since her adolescence, precisely those studies which lay the ground for her later on carefully constructed art. Interesting enough, this idyllic house amidst lovely green meadows and blue lakes in one of the most beautiful parts of Sweden has also connected to yet another artist, that is, the Berlin-based American installation artist Jason Dodge taking part in a group show called Spatial Works at Färgfabriken in Stockholm in 2009, at which various light devises were installed, such as light bulbs, tubes and ordinary domestic lamps, all of them taken from Frieberg’s house, thus entrusting it to total darkness for a long period of time.

Moreover, highly interesting in this context is also the fact that Jason Dodge’s first permanent installation located in the tower of a former electrical factory in Reggio Emilia in Italy (2013) consists of, among other things, a window perpetually ajar, a window which is open forever letting the air go through it, a window evoking the artist’s own declaration that much of his work concentrates on the notion of how something means something as opposed to what something means and that this flexibility of perception drives the way a work is seen and experienced, precisely as in the case of Elisabeth Frieberg. Then, having this in mind, it’s hardly a coincidence that the monochrome “paintings” of her Dawn, Naten are fifty three in number, that is exactly as many as the windows of her parents’ house, and that these paintings follow the size of the actual windows. At the same time they are painted in oil on plywood, a material intentionally as thin and flexible as possible, almost like canvas, thus connecting them to the “grand” tradition of oil painting, a notion which also clearly corresponds with the “gestural” traces left in the paint as they were dragged from the shore and then along the lake like a timber raft, thus also bumping into each other and therefore inflicting each other with “painterly” damages as shown in the “documentary” video piece included in the statement as an essential part of the work itself. But what about the drilled holes in the panels besides being functional for attaching the ropes? It seems that the “roped” light of the paint is crucial here, at the same time the holes point at the objecticality of the paintings defying their “windowness”. 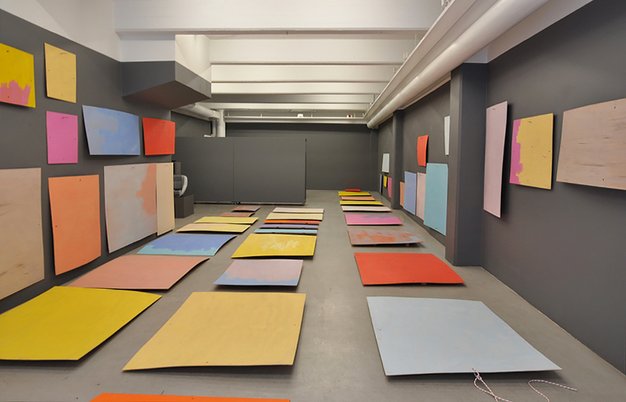 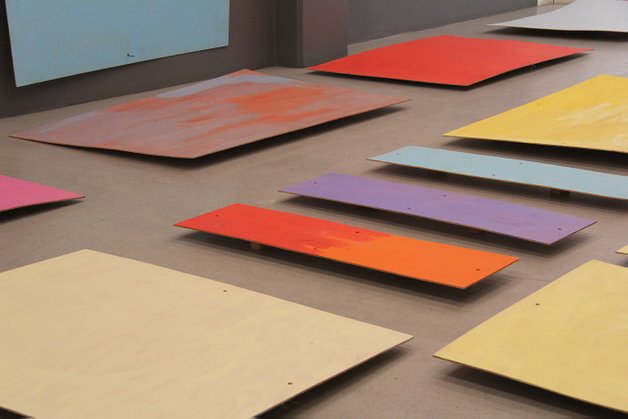 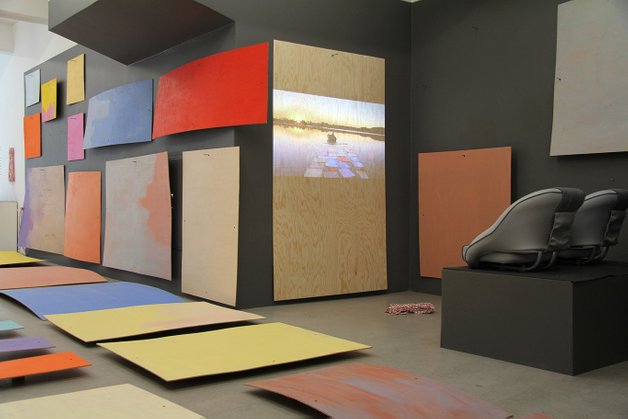 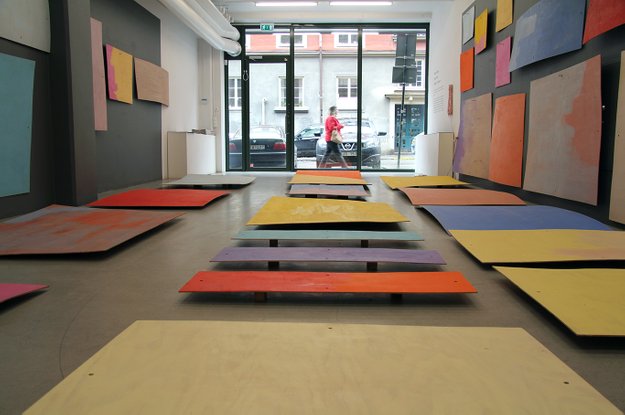 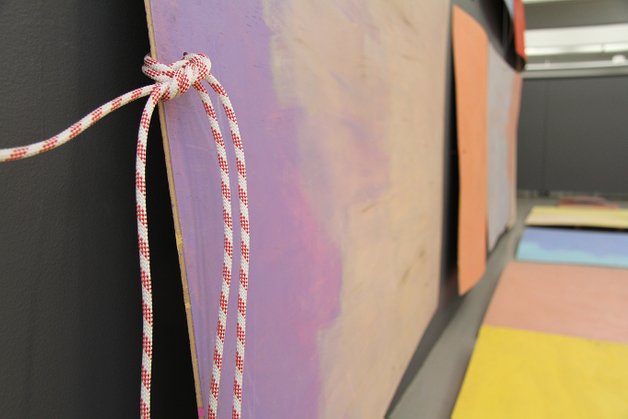 How often does one see an artwork able to extend itself outside the room. Which fills the exhibition space with an evident presence and moves beyond its own spatial expression. How often do we meet a painting, which is able to add something to the discussion of its existence. Elisabeth Frieberg’s installation “Dawn, Naten” manages to do it.  Some fifty boards of plywood in different sizes are placed on the floor in the narrow rectangular room. They lay on the floor, slightly raised as if they were floating. One by one they follow the spaces direction on the way to its own condition. At the same time stagnant and in movement. The woods matted surfaces shines. In a few boards the colour is fading and is pulled into the material, whilst in the other raises and opens up new spaces. The paintings are reflecting alternatively sky and mud.

The boards are curved distorted after being pulled after a boat over the surface  of a lake. The action took place during the dawn one summers evening, and in the gallery space one can take note of the documentation in a pair of boat armchair that has been installed on a podium. Frieberg’s installation “Dawn, Naten” examines, in a very direct way, the relation between image and reality. It is executed with a powerful immediacy that on the same time is multi layered with a skewed spirituality. The piece constitutes a continuation of her interest in landscape painting, of how the colours in the world can be trans-mitted and defined in other situations. The board’s different shades could be read as representations  of the lights beams. But divided, the densified bodies of colour become something else.

Frieberg’s installation is characterized of a presence of clarity, where the board’s holes have functioned to bind them up together during the action and as a suspension in the gallery space. This pragmatic move plays against the projects more emotional undercurrents. “Dawn, Naten” combines a dry and next to an unpretentious way of painting together with   a passionately conceptually execution. It is as attractive as effective. 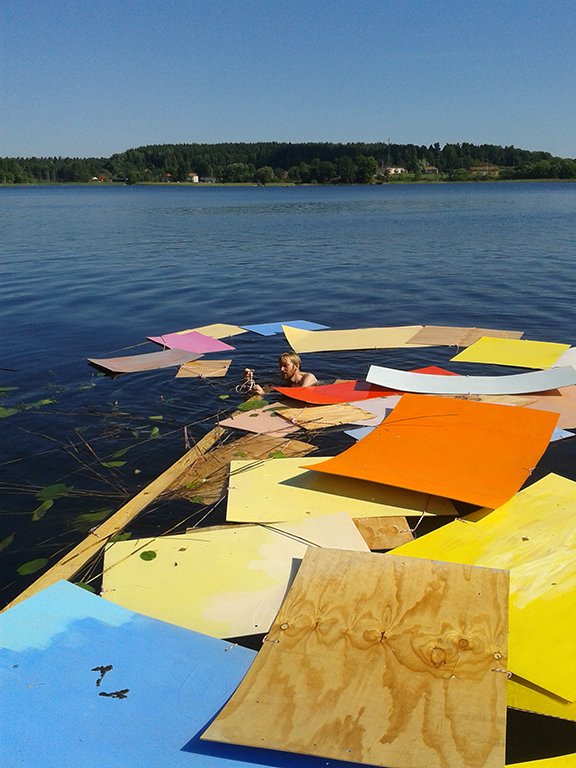